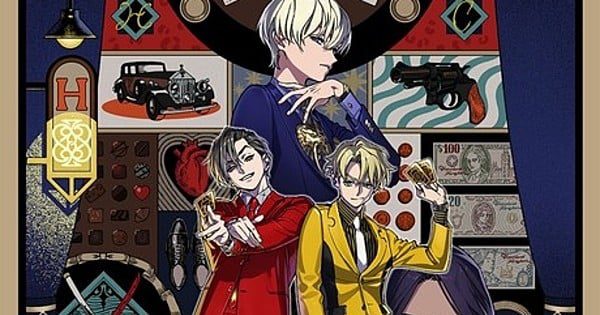 , an original anime from TMS, seemed to have garnered a good amount of hype for its premiere at Anime NYC since there was a whole waiting room worth of people lined up before it started. Whether they were drawn into the cool style or by the fact that the original story was co-written by ‘s creator Homura Kawamoto, the panel was packed. Each seat also had a small pack of unique playing cards that the host explained played a special part in the show. After we were seated, we wasted no time and dove right into the first episode of , and honestly…that was a lot to take in.

The episode opens with a fortress exploding as these rogue agents with mysterious powers are looking to steal something. During the shuffle, something is revealed to be playing cards, which ended up being scattered across the globe (Anyone remember , where the whole plot is about how there were 100 numbered cards scattered all over and they possessed special powers?) We then meet the protagonist, a street thief, trying to raise money to save an orphanage. He has one of the special cards that seems to grant him some ability, but he comes across people with similar cards. The episode ends with a visually striking standoff between him and another character.

Overall, this premiere episode feels like an over-the-top and stylized action movie. There’s enough vague world-building to keep us guessing, and the action choreography is surprisingly solid. The use of heavy shadows on the characters is distinct, and the fact that this seems to be a globetrotting show means we might be introduced to various characters from different cultures. The soundtrack also slaps super hard, with energetic jazz pieces that get my blood pumping! The only real complaint I have is that the abilities of the cards aren’t clearly explained. I’m unsure how the card types correlate to the powers shown or even what the main character’s playing card does specifically. But I shouldn’t expect to have all of these questions answered in the first episode anyway.

After the episode showing, Kawamoto, his brother Hikaru Muno with whom he co-wrote the original story, and producer Hiroki Okamoto came on stage in these incredibly dapper suits that were clearly inspired by the style of the show. What follows is a standard Q&A that gives us some insight into how this project came to be. It turns out that is actually inspired by the movie Kingsman, and the staff wanted to create a similarly-styled action series. They wanted to make an anime that would appeal to non-Japanese fans, so the idea of having a show take place outside of Japan would appear to be intentional (which is all the more interesting when you consider the fact that we got a chance to watch the first episode before anybody in Japan did). All three of them were blown away by the audience’s positive reception, and they promised to tell the production staff about their experience here once they get home.

Interestingly enough, Kawamoto explained that one of the difficulties of writing ‘s story is that it is very different from what he was used to. He explains that it’s a little bit easier to make things up as you go along when writing manga, but with a story to fill out a whole anime season, you need to have everything written out from the start to the end. It took him some time to adjust, but it ended up being an exciting learning experience for Kawamoto. The panelists also explained that the anime itself is like experiencing a roller coaster, no doubt in reference to the high-octane action and excitement factor.

Afterward, we were given a chance to take some photos and have a clearer look at the anime’s promotional art. We were also shown the official promotional video, which contained quite a few scenes outside the first episode, and I’m happy to report that they look equally as stylish. Shows like this usually aren’t up my alley, but color me intrigued to see where ‘s story goes when it comes out.