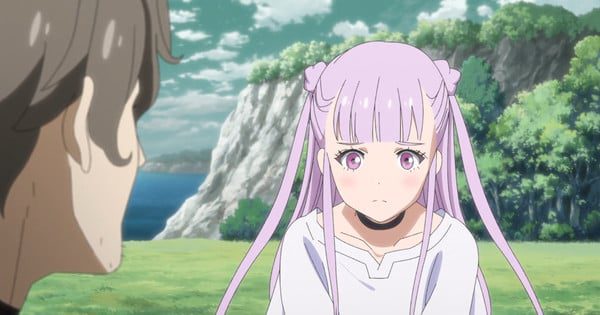 How would you rate Episode 1 of of
Giant Beasts of Ars?

starts off with a solid bang, with enough personality to hook me. Now the premise is not uncommon: Behemoths ravage the world, and hunters must stop them. The best of these are paladins who use powerful abilities to slay behemoths. But that’s not the only threat facing the common people of Ars, as a war of conquest is brewing. Against this tumultuous backdrop, the young archetype – Kumi – escapes from the prison where she is held and meets Jiro, the taciturn and highly skilled hunter.

This is a fairly formulaic series of entries which type, but that’s not necessarily a bad thing. Obviously, psychics fighting behemoths are always fun, so I’m eager to see where that goes. The problem is that we don’t have much premise to go on.

Our young runaway priest is a unique formula . Typically, stories in this production feature sinister intrigues from cunning individuals or groups, but it was a bit of a surprise to have a fugitive on the loose in the first episode. I thought we’d get more monster-hunting action-adventure stuff from the get-go, but that’s a tiny fraction of the premiere compared to her flight. The prophetic stuff is what you’d expect, but the cute little shopkeeper, centered on cat puns, is a delight. Honestly, for me, the real highlight of the episode was all the silly puns in the dialogue. I hope we get more of this little friend and/or other goofy side characters, because the main plot and cast seem grim.

How do you rate Episode 2 of
Yars behemoth?

again One episode from. The stakes are still low, both on the ground and personally, but we’re learning about who the characters are and their dynamics under pressure.

Jiro and Kumi are cute leads, this has helps a lot. Anytime you have co-leads and there’s some friction between them, finding the right amount of salt and sugar can be a difficult balancing act. Jiro and Kumi have a great balance of caring for each other and comedic conflict, and I hope they keep that dynamic as the series continues. Myaa is a terrific third-rounder; her poking and prodding is a little jarring, but her comedic beats do a good job of masking any potential annoyances.

The real star of this episode is the visuals. The concept of a paladin and priest fusion is cool, and the visuals that go with it are pretty exciting. Jiro’s

The enhanced ability mod looks great, and when Kumi merges with him, the criss-cross slit that runs through his body is enough to feel foreign and unfamiliar. I also really like the giant floating battleship, as it’s a huge, rickety, tough-looking arcane ship. It looks like something straight out of a Zeon playbook, with its massive top-heavy design.

Fence, it certainly hasn’t made any strikes yet. So far, so good. Rating:

How do you rate
Episode 3 of Ars Behemoth ?

This episode lags a bit compared to the first two episodes. While I certainly appreciate the narrative’s decision to pause and allow time for character development, I’m not sure I find the content here that engaging.

I feel that the whole episode can be summed up as follows: Jiro has a bad temper and Kumi is curious. That’s not necessarily a bad thing, but I wish I’d learned more about them during all this. The village is kind of boring without much intrigue or unique world building. We got a new character in Meran, but I don’t know how to feel about him at this stage. Maybe with time he’ll make more impressions.

The monster didn’t do anything for me either. The beast of the week is an elephant, but eeeeeevil, there is a real lack of dynamism in the design. The intended effect might have been to warp a familiar creature into something unsettling and alien-looking, but the result was just an eerily smooth elephant that looked like a vague silhouette drawn from memory . It was basically just a giant gray blob, but then a gray blob with red eyes appeared. Honestly, it’s not that impressive or intimidating.

We got more great Myaa moments and Silly lines, at least, suggest exciting developments in the episode’s final moments. But either we need to step up the plot, or go deeper into the character development here, because this episode was so-so.

Grant is the co-host of the Blade Licking Thieves podcast and the Super Senpai podcast.

is currently playing on HIDIVE.

17.11 – Who am I?Conversations around identity

Solana Continues Its Freefall – Will The FUD Ever Stop?