Avalanche Crumbles 10% – Was The AVAX Rally A Bull Trap? 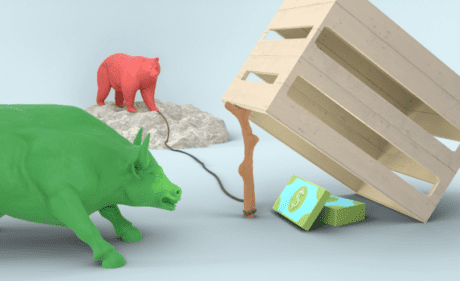 Avalanche has been going up the chart ladder since the start of the year, following the broader crypto market rally as major cryptocurrencies break through crucial resistances. But right now, its native token AVAX seems to have found itself a new ceiling.

According to Coingecko, AVAX is down 10% in the daily time frame, landing it a spot as one of the bigger losers as of today, January 25th. This has led to speculation that Avalanche’s most recent rally that was triggered by partnerships with Amazon Web Services and with Alibaba was just a so-called “buy the rumor, sell the news” event.

The saying “buy the rumor, sell the news” describes a common trading technique in which investors buy a security on the basis of rumors about an impending news announcement or data, and then sell the asset once the news is out.

This could afford the trader an opportunity to purchase the security before everyone else does so that he or she can sell it at a profit when demand and price rise.

Although developments on-chain have been particularly bullish, external market forces seem to be the dominant force for the token’s slippage today. At the time of writing, Bitcoin and Ethereum have approached their respective resistances with no breakthroughs made by the two cryptos’ bulls.

But with recent developments like the ecosystem’s partnership with Canadian e-commerce company Shopify, we might see Avalanche become more mainstream as consumers from Shopify familiarize themselves with the ecosystem.

However, recent news shows that on-chain metrics have not improved since the announcement of the partnerships. Validator count still hovers around 1,200 ever since. The realm of DeFi also does not show promise for Avalanche.

According to DefiLlama, the ecosystem’s total value locked declined 3% since yesterday. This can be a sign of a slight loss in investor confidence as investors would have felt misled by the recent market movements.

Investors are somewhat bearish because of the recent rejection at $19. According to CoinGlass data, short sellers out-number the long buyers by a significant margin, adding to the overall bearish weight of the situation.

If the token continues to do worse and closes today below $16.85, we might see the bears retest the $15.74 support range. However, on-chain developments should be able to keep up with the market’s current sentiment.

With the token’s high correlation with Bitcoin and Ethereum, investors and traders should also monitor the price movements of these coins. As of writing, bears in the BTC market are retesting $22,661 support with ETH retesting $1,520 support at the same time.

For now, long position holders of AVAX should brace for short to medium term as bears try to claw their way into position. AVAX bulls should also try to consolidate above their support as this would enable the token to have a strong plank to burst through $19 resistance.

Kim Kardashian, Pete Davidson and condom gloves! These Are Vogue's Most Viewed TikToks of 2022