CAR-T therapy effective in youngest child with ALL 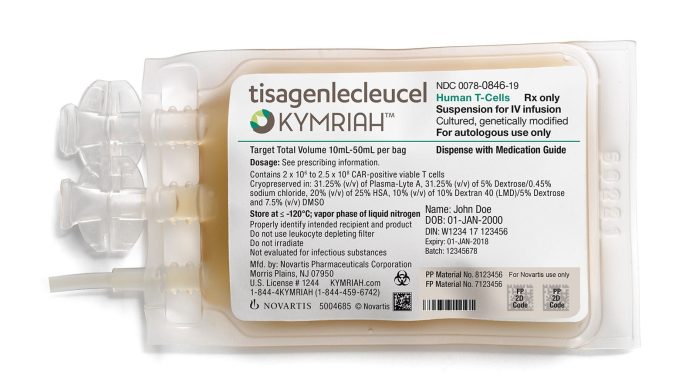 In a retrospective cohort study, the use of tisagenlecleucel (Kymriah) was compared with previous It was found in older children in the ELIANA trial.

In an analysis of 38 patients – most of whom had infantile ALL – overall survival at 6 and 12 months after infusion Hôpital Universitaire Robert Debré and Université André Baruchel, MD, Paris, reported that chimeric antigen receptor (CAR) T-cell therapy was 88% and 84%, respectively, and event-free survival was 75% and 69% at these time points,

Severe cytokine release syndrome (grade 3 or greater) occurred in 14% of patients receiving tisagenlecleucel infusion, while neurotoxicity or immune effector cell-related neurotoxicity syndrome was observed in 26 % of patients, none were severe.

“Our findings are encouraging, r considering the historical outcomes of infant acute lymphoblastic leukemia following HSCT [hematopoietic stem cell transplantation], if confirmed by longer follow-up, they Supports a prospective study to compare the efficacy of tisagenlecleucel with HSCT early in the treatment course in this population,” Baruchel and colleagues wrote in The Lancet Haematology road.

In an accompanying commentary, the study by Haneen Shalabi, MD, and Nirali N. Shah, MD, of the National Cancer Institute in Bethesda, Maryland, noted that its results “are from The largest study of our knowledge of infants and very young children treated with tisagenlecleucel, fills a critical gap – especially since the global registry trial (ELIANA) excluded children younger than 3 years of age.”

Of the 38 patients in the Baruchel study, 36 CAR T cells were made. Thirty-five patients were infused with tisagenlecleucel, and toxicity and disease-related outcomes were assessed.

In this study, Baruchel and colleagues used the ELIANA definition of event-free survival (time from infusion start) to the earliest of the following events: no response, response Relapse for at least 28 days before relapse, or relapse after complete remission or complete remission but incomplete hematologic recovery).

Incidence at 6 months in additional analysis using stringent event-free survival measures (increase in the presence of measurable residual disease or receiving further anti-leukemia therapy, including allogeneic HSCT) was 63%, and the 12-month incidence was 41%.

In their review, Shalabi and Shah observe that using this metric suggests that while CAR T cells provide substantial benefit to this patient population, “there is still an opportunity Further optimization of this treatment approach.”

Regarding safety, 60% of patients receiving tisagenlecleucel infusion with the cytokine release system developed any grade of syndrome. The median duration of cytokine release syndrome was 1.5 days (compared to 8 days for ELIANA).

Long-term cytopenias (after day 30) were observed in 15 of 23 patients with evaluable data, and 12 were severe (grade 3 or more). Infections were documented in 10 of the 34 patients, nine of whom were grade 3 or more severe. Infections included bacteremia in 7 patients, abdominal infection in 2 patients, and bacterial meningitis in 1 patient. There were two cases of febrile neutropenia. There were no deaths due to toxicity, only disease progression or relapse.

This study was conducted in 15 hospitals in 10 European countries. Eligible patients were children younger than 3 years of age at screening between September 1, 2018 and September 1, 2021. Each patient received a single intravenous infusion of tisagenlecleucel.

5.2 months for the entire cohort and 17.0 months at the time of tisagenlecleucel infusion. Twenty-five of 38 patients relapsed after prior allogeneic HSCT, with a median of 2 lines of prior non-HSCT therapy. Most patients had previously received immunotherapy. The median follow-up time was 14 months.

8 Ways to Prevent Shoulder Pain from Ruining Your Workout

How Marketers Can Use Cognitive Bias to Influence Customer Decisions

Big Pharma goes all out to stifle drug pricing talks