HomeFashion‘God’s Creatures’ Star Emily Watson on Bonding With Paul Mescal and the...
Fashion 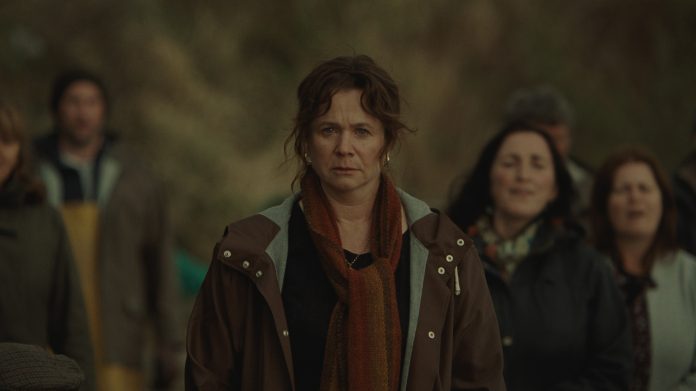 With a single glance, Emily Watson can communicate more about her character’s inner world than many actors can with a full page of dialogue. Yet across her storied career—from a harrowing, Oscar-nominated performance in Lars von Trier’s Breaking the Waves, to the sweetness of her turn opposite Adam Sandler in Paul Thomas Anderson’s Punch-Drunk Love, to her steely strong-headedness as a nuclear physicist in HBO’s Chernobyl—few roles have provided a better showcase for her magnetic, mercurial screen presence than A24’s latest, God’s Creatures.

Watson plays Aileen, a mother giddy with joy after her son, Brian (Paul Mescal), makes a surprise return to their remote fishing village in County Kerry, Ireland, after a few years in Australia. (If we’re talking about what Watson can do with a single glance, the scene in which Mescal shows up in the middle of a funeral wake and Watson’s eyes light up with wary delight is worth the ticket price alone.) It doesn’t take long, however, for Brian’s presence to create a deep rift in the community, and after he’s accused of sexual assault, Aileen is forced to weigh her moral conscience against an unthinking devotion to her son.

Directed by the American filmmakers Saela Davis and Anna Rose Holmer, but written and produced by Fodhla Cronin O’Reilly and Shane Crowley, a pair of childhood friends who grew up in Kerry, the film drips with a briny, austere, and very Irish air of dread, descending from a kitchen-sink drama into something altogether more menacing. But anchoring it all is Watson’s breathtaking performance, in which she communicates—in some cases, entirely wordlessly—an increasing sense of horror as she realizes the devastating implications of a split-second lie to protect her son.

Here, Watson talks to Vogue about how she developed her rapport with co-star Mescal, and how she’s learned to leave an intense character like Aileen behind her after shooting ends.

Vogue: When you first read the script, what was it about the mother-son relationship at its center that intrigued you most?

Emily Watson: First of all, the script was absolutely riveting. Within the first few minutes of reading, you could almost smell the sea air—it was so clearly coming from an incredibly authentic place, and so I immediately wanted to know who the people behind this movie were. It was clearly somebody who really knows this world, as it comes from a place that is very, very deeply felt. The complexity of that kind of community, where everything is buried and nothing is really spoken about, and the toxicity of that, especially within the moral framework of being a Catholic family…there’s this rich, dark complexity to it. With the mother-son relationship, it’s obviously a relationship that’s a bit off, because it’s just so intense. You know, she’s fixated. She’s sort of in love with her son. So that was instantly fascinating, and felt like very rich material as an actor.

As you say, so much of the story hinges on the authentic way in which this small Irish community is represented—but did you also feel there were some more universal truths in there too, especially in this tale of a woman who is assaulted but not believed?

Absolutely. It’s like a Greek tragedy, really. What’s right at the heart of the movie is the appalling way in which the community closes ranks around the perpetrator and ostracizes the woman. That’s a very real issue, particularly in Ireland—there have been recent cases where that’s happened. But it’s a universal story too, of course. The odds are stacked against victims of sexual assault in every community in the world. What’s fascinating to me [in God’s Creatures] is that it’s not just the perpetrator who’s at fault. It’s the community itself, and in particular the mother, who loves her son so much that she will protect him against anything. And even though she considers herself to be a moral person, she commits crimes on his behalf and lies, and then watches as the world around her begins to collapse as a result of those actions.

You’ve done plenty of impressive accent work in your career before, including an Irish accent in Angela’s Ashes. The thick Kerry accents in God’s Creatures really give it a sense of place—were there any unique challenges when it came to preparing for it?

Well, when I first was offered the job, I Googled “Kerry accent,” and got to a video of two guys coming down off the mountain having lost their sheep, and I couldn’t understand a single word they said. That really put the shits up me. [Laughs.] I mean, I was like, this is really going to be impossible. Fodhla Cronin O’Reilly is the producer of the film, and she is from one of those villages, as is Shane Crowley, the writer, and they’ve known each other since they were 12. So because they came from that world, I spoke to various members of their family and listened to recordings of them all, and they actually all sound very different. Women speak differently to men and different generations speak very differently too, so I felt reassured by that, at least. But yes, I had a dialect coach, and I don’t just come to it easily—I have to study and work hard to get there.

Your chemistry with both Paul [Mescal] and Aisling Franciosi [who plays Sarah, a woman in the community] is electrifying. How did you go about building that rapport with them?

We were actually very, very isolated. We filmed when it was level five lockdown in Ireland, and while I’d had a jab in England, they had only given out very few in Ireland at that point, so the COVID protocols were extremely stringent. We began by isolating in our own cottages on the Donegal coast, which was amazing, to be honest. Just to be in a little house by myself, looking at the sea and spotting dolphins…although it was also a fairly intense period, not really seeing anybody and then rehearsing on Zoom. After that, we all stayed in this hotel with nobody else in it for about 10 days to rehearse, and it was like being sprung out of a cannon. Suddenly, there was this visceral energy, and it helped because the main characters here are very much not head people, they’re quite animalistic. When Aileen lies to protect her son, it’s not a thought-through thing, it’s the instinctive lashing out of a mother. We did a lot of running around and playing hide-and-seek and going a bit wild in his hotel. The directors were keen that we were very much in our bodies, and the film was very much about the physical work—the physical space between us and the body language between characters. With Paul, it was also important that we found the joy in that relationship, as you really have to invest in how much they loved each other and how close they were. And, well, to be honest, what’s not to love. [Laughs.] It’s Paul Mescal, and he’s truly a delight, so that part was easy. We all formed a very strong team and kind of looked out for each other, because it was quite a tough road ahead.

As you touched on earlier, so much of the film is about this community preferring to sweep things under the rug, and there’s a lot that happens that goes unsaid, meaning you have to communicate Aileen’s journey almost silently. Did that make her a more challenging character to play in any way?

I think that was very much down to the trust between me and the filmmakers, but we did discuss it very, very carefully and deeply—the minutiae of Aileen’s emotional journey, and the different aspects of it and conflicts within it. We trusted each other in how we were going to let that play out, because it’s really at the center of the movie—this inner turmoil that goes from unadulterated joy to perpetual torment, and how it unfolds, and how she really has no one to blame but herself for what happens to her in the end. The Furies have come for her.

When you’re playing a character as intense as Aileen, are you the kind of actor that is able to switch her off at the end of the shoot, or did she stay with you at all?

It can be draining, but we were really good at looking after each other during the shoot, and at the same time we had a lot of fun, we had a lot of laughs, and found the lightness in it all, which you have to do when it’s that intense. If you know you’re surrounded by really great humans, it allows you in a way to fall further and deeper into the pit of it as you know that it will be easier for you to shed it. I’ve got better at that as I’ve got older, also—as you go through the process again and again, you understand more about the physiognomy and the psychology of it, and that if you’re aping emotions that are real, you know, your body sometimes doesn’t really know the difference. The neural pathways that you’re traveling down are very similar to the ones that you would actually be traveling down if you were experiencing something real. So you have to just make sure that your body is free of it afterwards, and to shake it off and let it go. You have to be very conscious of it all too, otherwise you finish the shoot and end up sitting there like: Why am I sad? You have to be able to know it’s not real and let it go.

The film deals with plenty of weighty themes, but which of them did you hope the audience would ultimately take away from it?

I was actually talking to Paul about this last night. I think our ambition for this film is that people come away from it encouraged to confront those awkward conversations. Why are there so many parents who never have a proper conversation about consent with their sons? Let’s try and change that. If you’re raised as a good Catholic, that conversation never happens—it just isn’t really a thing. It’s not part of the moral framework of a traditionally religious family setup, and it needs to be.

This conversation has been edited and condensed for clarity.