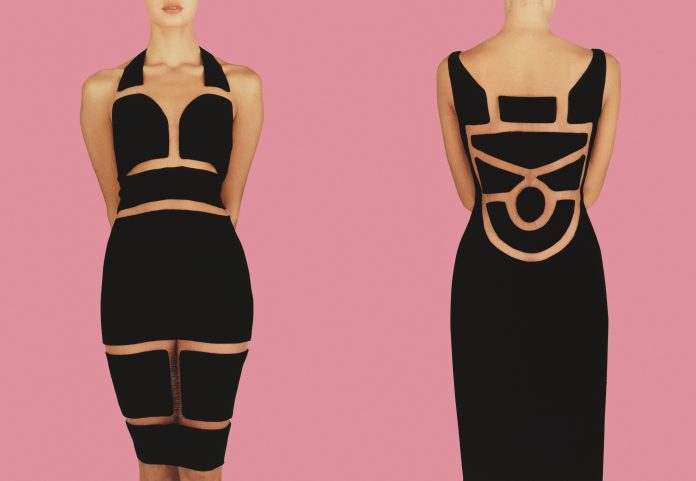 What I have in front of me is the most almost miraculous dress I have ever seen. It’s made of geometric shapes and curved black parts, apparently held together by air. At 1996, this incredible piece could easily be the dress of the year as the desire for nude cutouts sweeps the fashion world. The only problem is that it was designed in 80 by the brilliant, impractical, mysterious Sybilla at the time 90 year-old lady put Spain on the fashion-forward map.

Now, her work is finally getting a close-up look at the generation of “Sybilla: The Invisible Thread” retrospective at the Sala Canal de Isabel II in Madrid. I made the pilgrimage there for a chance to meet the elusive woman whose work left such an eccentric and fascinating imprint in the 80 years, a young of female independent designers in what was then an almost entirely male-dominated fashion industry.

“Invisible Thread” – The title apparently refers to a technique Sybilla invented to pause her seemingly impossible floating abstracts. How did she do it? Even if you stuck your nose to a glass window in a museum, her technique wouldn’t be detectable – I tried. “Well, first,” she laughs, “I sewed them together with fishing line. Then my factory in Italy invented special ribbons for me.”

Sybilla at Sold in US department stores and emerging concept boutiques,

s and early 80s. When curator Laura Cerrato Mera called on owners to lend the exhibit, women flocked. The customer never to be parted from Sybilla appears in a private view with her daughter in a mother’s dress.

No wonder why – Sybilla’s collections are surprising, delightful, funny, chic, all totally relevant right now. There are shapes with wire hems and padded curlicues; skirts that look like seed pods, crumpled organic vegetables or stones. A string of starfish hung from a fishnet “sea shawl”; several metal-cut birds were tied to coats rather than buttons, and a spiral bra cutout on a black dress looked almost like a pair of snail shells.

And then the black shapes or splashes of red of her stately cloak. An elegant and dynamic skirt somehow becomes a sari-style scarf draped over one shoulder. Many of her forms are simply inexplicable and are never technically explained in the exhibition’s captions. The closest Sybilla comes to describing her artful drapes and geometric shapes—some of which are convertible—is that she “carves in fabric.” As a woman who always hated being categorized or stereotyped, maybe she refuses to unravel all of her mysteries.