HomeSportMessi-mad Indian mom driving to Qatar to see hero in his final...
SportUncategorized 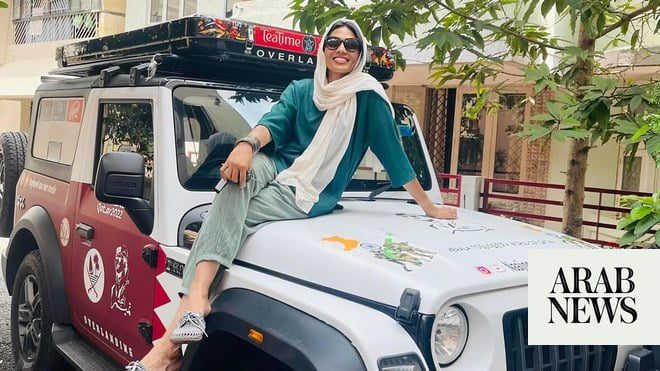 NEW DELHI: A housewife mom and die-hard Lionel Messi fan has embarked on a solo trip from southern India to Qatar to watch the FIFA World Cup and inspire other Indian women to dream big.

Naaji Noushi, 33, started her journey last week from Kerala’s Kannur district. She was traveling in an Indian-made Mahindra Thar SUV, which has been modified to include a kitchen. After arriving in Mumbai in a four-wheel-drive vehicle she nicknamed “Ollu” (the woman), the car will be transported to Oman, from where Noushi will continue her journey.

Her route passes through the United Arab Emirates, Bahrain, Kuwait and Saudi Arabia, and she hopes to reach Qatar in the first week of December, when the race is already in full swing.

“I’m a big fan of football and a big fan of FIFA. The World Cup is an opportunity for all countries to come together and show their courage and performance,” Noushi told Arab News on Monday, in Karnataka, the first leg of her journey. Stopover – 1400 km drive to Mumbai.

My favorite team is Argentina. When I started watching football, the only person I wanted to focus on was Messi,” she said. “This is his last (international) game and I wish him victory. ”

Messi has won almost every football award except the World Cup. As this will be his last game, the victory for Argentina will be a happy ending to his illustrious national team career.

Noushi began preparing for her Qatar trip in September, but it wasn’t her first ambitious solo trip.

In February, she traveled to Nepal and reached the base camp of Mount Everest, the world’s highest peak, in just five days. Last year, she drove 13,000 kilometers from Kerala to the Himalayan region of Ladakh, which borders China.

Noushi said her desire for adventure came from not being able to travel often as a child.

“I come from a typical Muslim middle-class family. My mom never had money to send me on any school trips,” she said.

Noushi’s first trip was sponsored by her husband, who works in Oman, but recently she’s been able to fund her adventures with money she makes from vlogging travel blogs.

While looking forward to the Qatar trip, Noushi said she was a little nervous about it.

“I’ve been having sleepless nights because it’s a dream. It’s been a long journey.”

Like the phrase her soccer hero is associated with – “When you have a dream to chase, nothing can stop you” – Noushi hopes her journey will give more women the courage to chase big dreams.

“Adventure is a form of self-discovery for me, designed to inspire all the women who are stuck at home right now and don’t have any dreams,” she said.

“I wanted to show that women can do anything. Women have more power, and as mothers, they can create their own lives.”

She means it. After Qatar, Noushi’s next goal is to visit 100 countries on all seven continents… with the help of “Ollu”, of course.

Professional College Essay Writers – How to Pick the Perfect One