Mummy.io Announces Partnership With Polkastarter As Demo Release Approaches, Here’s What We Know 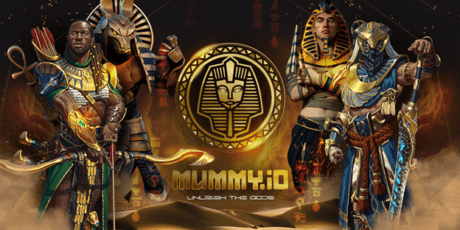 The non-fungible token (NFT) space has been used to innovate across multiple sectors, but the gaming and entertainment industry has seen the biggest benefits. These digital assets have allowed companies to create new universes and models for fans to connect with their favorite artists, or for players to earn real-world rewards while playing their favorite games.

However, as more people jump into Web3 and NFT gaming, more projects try to copy-paste others and the sector loses innovation, creativity, and the features that attracted users in the first place. Mummy.io is a blockchain-based massively multiplayer online role-playing game (MMORPG) looking to change the status quo.

The game will put players in a rich world based on ancient Egypt, built with Unreal Engine 5, Mummy.io will be like nothing users have seen in the past. The main complaint for NFT gaming has been its little attention to detail, mechanics, and graphics, Mummy.io will disrupt all of that.

According to the project’s Whitepaper, this is how Mummy.io will revolutionize the sector, the experience will be like that of titles created by major gaming studios:

The player has endless freedom to make choices during the game – whether to embark upon a sidequest, the parts of the world they choose to explore, how they engage with NPCs, and much more. The Mummy world is also rich in lore, environmental storytelling and intricate relationships between memorable NPCs for those who delight in exploring fantasy worlds, finding hidden meanings and layers.

Created by a team of people with decades of experience in the gaming industry, from major companies like Square Enix and Ubisoft, Mummy.io wants to bring back the fun for blockchain and NFT gaming. In that sense, they partnered with Polkastarter Gaming, a Web3 launchpad, and accelerator company, that will act as an advisor in the project’s development journey.

The partners share a common vision: Web3 gaming should be as fun as traditional games, and their collaboration will materialize it. Polkastarter wants to pave the path to the future of gaming, starting today.

In addition to Mummy.io, the company has partnered with BK Time, Mecha Morphung, Wasted Lands, Cyball, Mobland, Wonderhere, Undead Blocks, Aether Games, and other well-known projects in the sector. The team of Mummy added the following on the project’s vision, one that they share with their recent partner:

Our ambition is to be at the forefront of innovation in the gaming industry. We are excited about the long and challenging journey ahead of us and are passionate about the process of bringing our vision to life.

Standing Out In A Crowded Sector, Mummy.io Breaks The Mold

Beyond its beautiful graphics, rich universe, RPG elements, and advanced combat mechanics, Mummy.io will introduce an in-game economy design to incentivize players to collect loot and build a community of friends and factions rooted in intricate human connections.

In addition, Mummy.io is working with Machinations.io to create and offer players a unique in-game economy. The game will integrate with the Machinations’ Game Economy Health Monitoring Service to mitigate any possible issues with Mummy.io’s economy.

The game’s first demo, “Battle of Ankahur the Fallen” will soon be available for players looking to get a taste of Mummy.io. Right now, players can connect their crypto wallets and be whitelisted for the project’s Stela NFT airdrop and earn a fragment of an in-game item called Tear of Aaru artifact.

See more about the demo “Battle of Ankahur the Fallen” below. The demo will be divided into chapters with each installment containing one Stela NFT. If a player obtains 3 of these digital assets, they will complete the “Tear of Aaru” artifact.

Serena Williams beats Danka Kovinic to advance to second round of 2022 U.S. Open