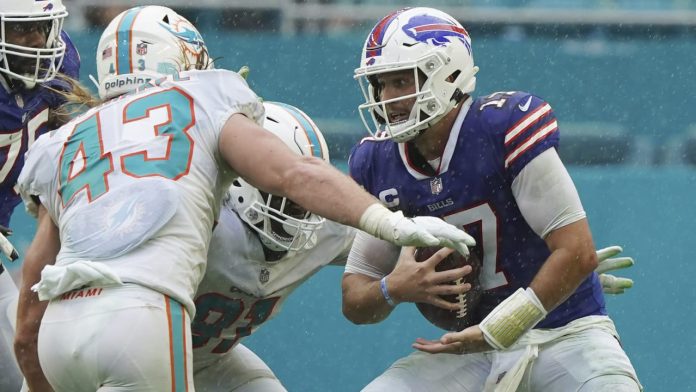 Itching to watch an underdog try to overcome the odds or triumph against adversity? Simply looking to pass the time reading another NFL.com article while stuck in your cube? Nick Shook offers a bead on five us-against-the-world scenarios to track entering Week 3 of the 2022 NFL season. The order below is determined by confidence rankings, from No. 1 (most confident) to No. 5 (least confident).

Week 3 should bring us back to earth.

That’s no good for upsets, of course. We’re here to choose underdogs, not chalk!

Here are the five underdogs in which I most believe will score wins in Week 3.

The lines below provided by DraftKings are current as of 2 p.m. ET on Wednesday, Sept. 21 unless otherwise noted below.

The home Broncos shouldn’t be the underdog in this, at least not on paper. They certainly wouldn’t be if we’d viewed this game before the season kicked off. But Nathaniel Hackett’s rough start to his head-coaching career has made the Broncos a tough sell, with the masses poised to pop on Denver games to see when Hackett’s next blunder will arrive.

Denver has struggled mightily in goal-to-go situations, failing to produce a single touchdown in its first five trips inside the opponent’s 10-yard line. That ties the 2007 Falcons and 2001 Lions for the longest such streak to start a season in the past 30 years. Side note: That Atlanta team went 4-12, while the Detroit crew finished at 2-14. That said, those teams didn’t have Russell Wilson at quarterback. The star is no Joey Harrington (’07 Falcons) or Charlie Batch/Ty Detmer (’01 Lions). And for this reason more than any other, I believe the Broncos will iron out their issues, starting on Sunday.

Jimmy Garoppolo is back in the lineup. His completion percentage, yards per attempt and passer rating since 2021 are all superior to Trey Lance’s marks, though the veteran obviously lacks the running ability of his younger cohort. I expect the 49ers to feel mighty comfortable with Garoppolo, but they’ll also be staring at a shorter ceiling.

Am I confident in Hackett? Not in the slightest. But I believe in Wilson and Co. It’s time for Broncos Country to truly ride.

The game of Week 3 didn’t look quite as appealing a week ago. In fact, it looked like the Bills would be heavily favored. But things move fast in the NFL, and here we are.

Look, I’m the opposite of a TuAnon member. I’ve long felt uncertain about Tua Tagovailoa’s viability as the long-term starter in Miami.

Then last Sunday happened, and everything changed.

Tagovailoa’s six-touchdown explosion turned the unlikely into reality, leaving Ravens fans everywhere stunned. I had to pick my own jaw up off the floor after watching Tagovailoa pull off the improbable comeback, and while I’m not investing my life’s savings in these Dolphins, I’m certainly buying what they’re selling.

Of course, the team visiting Miami this Sunday presents quite a challenge. Josh Allen is a perfect 3-0 in head-to-head matchups with Tagovailoa, having won his last seven games overall against Miami. But Tagovailoa is on an early pace similar to Allen’s breakout season of 2020, and these Dolphins feel different. They’re a high-flying group with the confidence necessary to run with the Bills for four quarters.

Let’s roll with Miami in a thriller. The eyes of the nation will be on this bout, even though it’s in the crowded 1 p.m. window.

Hats off to Cooper Rush, who played well enough vs. Cincinnati to build a lead for Dallas — and then discovered his inner clutch gene just in time to lift the Cowboys to 1-1. Will that be enough to get past the surprising Giants?

New Yorkers will emphatically respond with “No!” But the Giants haven’t exactly played the, well, giants of the NFL through two weeks. Tight wins over Tennessee and Carolina have the Big Apple giddy with optimism, yet now the G-Men are meeting a team that has owned them for the last half-decade. Dallas is 9-1 against New York since 2017. But can the ‘Boys further that dominance with the backup signal-caller under center?

Rush has a little bit of history at stake. If Dallas wins Sunday, he’ll join Roger Staubach and Jason Garrett as the only Cowboys quarterbacks to win their first three career starts. Through two starts, Rush also boasts better marks than Dak Prescott and Tony Romo posted in their first two starts. His victory last Sunday over the reigning AFC champs seemed impossible — until it wasn’t. The going should be a little easier against an upstart Giants defense that has played well, but still lacks talent in areas Rush might be able to exploit. (I know — I can’t believe I wrote that, either.)

Micah Parsons is probably still giving the Bengals nightmares. That will be the true difference this Sunday, when Parsons aims to overwhelm New York’s suspect offensive line, get after Daniel Jones and put the Rush-led offense in advantageous situations. Jones hasn’t thrown an interception in his last four home starts (all wins for New York). He is due for a pick, which just might change the outcome of the game. Give me Dallas.

Which team is Minnesota? Is it the squad that held Green Bay to seven points and won comfortably in Week 1? Or is it the group that looked completely overmatched on Monday night in Philadelphia?

If it’s the latter, these scrappy Lions have a legitimate shot. Detroit has punched above its weight in its first two games this season, taking the Eagles to the wire in the opener and earning an emphatic win over Washington in Week 2. The Lions are fun and they’re competitive enough to give themselves a chance against a Vikings team that might still be searching for its identity.

Detroit’s hitting the road for the first time in 2022, leaving the supportive confines of Ford Field for another domed stadium further north. The road environment might shake this upstart bunch, especially if the going gets tough early. But I’ve learned one important thing about these Dan Campbell-led Lions: They’re not laying down for anyone.

This game pits two veteran quarterbacks against inconsistent defenses, but one of the two is performing better than expected. Jared Goff has outplayed Kirk Cousins to this point, besting him in touchdown-to-interception ratio (6:1 versus 3:3) and passer rating (100.1 to 78.9). Goff is also one of four quarterbacks this season with six or more passing touchdowns and one or fewer picks. He might just be peaking in his seventh season, and players like Amon-Ra St. Brown and D’Andre Swift are benefitting.

History says Cousins has the advantage. He’s 4-0 versus the Lions at home and has thrived against Detroit. But again, these aren’t the same old Lions.

In the wake of Cousins’ three-pick debacle against the Eagles, the Vikings are looking to get back on track. Detroit is ready to keep them from reaching that track.

It’s a bit surprising to see the Seahawks, a team that hasn’t scored an offensive touchdown in six quarters, as the favorite in this matchup, but there’s logic to it.

Sure, Seattle’s offense hasn’t found the end zone since the first half of its upset win over Denver in Week 1, but the Falcons aren’t exactly a bunch of world-beaters, either. Atlanta is 0-2, and in both losses, the Falcons gave up 27-plus points. If ever there were a matchup for the Seahawks to get right offensively, it’s this one.

The same can be said about Marcus Mariota and Kyle Pitts, a pairing that has yet to find its footing in 2022. Pitts has just four catches for 38 yards in his first two games, and Mariota has been forced to look elsewhere through the air. It might be time for the two to finally link up for a big game.

Geno Smith and DK Metcalf have encountered similar struggles, with the two connecting 11 times for 71 yards through two games.

Both offenses are laboring early in the season. But one — Atlanta’s — has figured out how to reach the end zone more often than the other. For that reason alone (toss out the defensive discrepancies), I’m going with Arthur Smith and the Falcons in a close one.