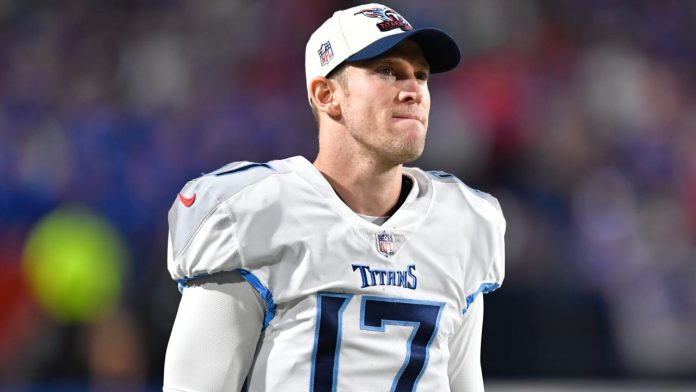 The Tennessee Titans suffered their most ruthless beatdown of the Mike Vrabel era on Monday night, a 41-7 loss to the dominant Buffalo Bills in prime time.

“It’s brutal,” Titans quarterback Ryan Tannehill said, via the team’s official website. “I haven’t been part of a whole lot of games like that. A brutal, brutal night. But we have a lot of football in front of us, so we have to turn the page quickly on this one and get ready to go next week.

“This one is tough to swallow, but we can’t sit around and have the woe-is-me attitude. We have to be able to turn the page and get some things fixed and come ready to go next week.”

The Titans scored on their opening drive, then were shellacked the rest of the game. The offense put up just 112 yards and eight first downs on the final 10 possessions of the destruction, and the defense got mowed down by Josh Allen and Stefon Diggs.

“We got our asses kicked, plain and simple,” Vrabel said. “They outcoached us, they outplayed us and that is the definition of it. We are going to get back to work and we’re going to figure out a way to win a football game.”

Tannehill completed just 11 of 20 passes for 117 yards, took two sacks and threw two picks, the second of which sent him to the bench in the third quarter. His 32.7 passer rating was the lowest in a game for his career, and it was the first time he’s had 0 passing TDs and multiple INTs since joining Tennessee (the last time was Week 17, 2018, with Miami in a 42-17 loss to Buffalo).

The offense couldn’t get Derrick Henry going, with the bruising back netting just 25 yards on 13 carries with a TD, his fewest rushing yards in a game since 2018.

Meanwhile, the Titans’ young secondary got pummeled by Allen and the Bills’ passing attack, as Buffalo scored points on six of its first eight possessions. The margin was so wide that Allen and the starters sat out the fourth quarter.

“It’s definitely an embarrassing loss, something I can’t remember ever happening before,” Titans safety Kevin Byard said. “A lot of things got us beat today. It’s tough, especially on Monday night.”

The Titans lost by 30-plus points for the first time since a 57-14 defeat at Houston in Week 4, 2017 — when Vrabel was then the Texans defensive coordinator.

Share
Facebook
Twitter
Pinterest
WhatsApp
Previous articleRB Index, Week 3: Let’s get physical … at the goal line! Plus, a new No. 1 in the running backs rankings
Next articleSamsung announces Galaxy XCover6 and Galaxy Tab Active4 Pro arriving in the US