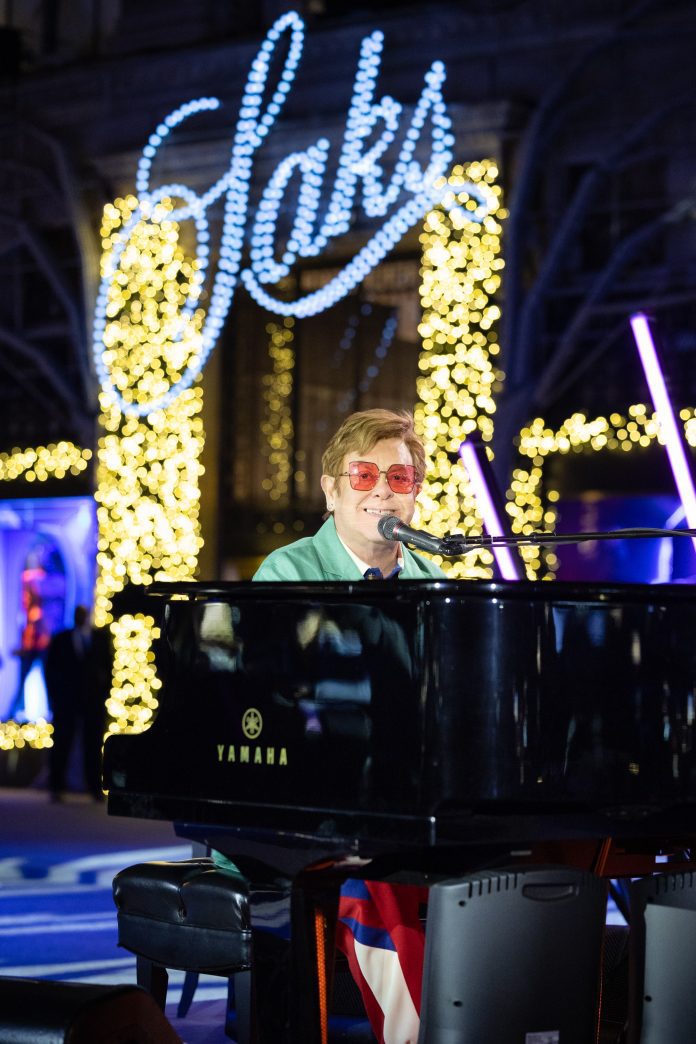 , and the unveiling of the Saks Fifth Avenue Holiday Display, which stretches beyond the windows to the top of the department store block – long Long Fifth Avenue facade. The latter happened last night, and for everyone who attended (or streamed the session), it was an event that made it clear that it was starting to look a lot like Christmas.

First, the Saks guests are here — In-store cocktail party; attended by Saks CEO Marc Metrick; Rupal Patel; and Tracy Margolies, as well as Saks friends such as Jason Wu, Prabal Gurung, Laura Kim, Alexandra O’Neill, Lili Buffett, Nell Diamond, et al. Then, just before 7pm, guests take their seats in the stands across from the store. Underneath the Saks embroidered blanket, everyone is waiting for the special and its surprise performances. Sir Elton John (Sir Elton John) has just departed from the last American leg (Los Angeles) of his Farewell to the Yellow Brick Road

tour, aboard the Here comes the pink gold trolley. Dressed in red sweatpants, a teal blazer and his signature glasses, the superstar took a seat in front of his piano, which was wheeled directly onto Fifth Avenue as traffic temporarily stopped. “Saks is proud Being able to support the Elton John AIDS Foundation and working with Sir Elton John shares our passion for expressing ourselves through creativity and fashion,” Metrick introduced John to the audience.

John sings “Your Song” while behind him, the department store lights up in a rainbow light show. But this moment isn’t just the start of the holidays; it’s also the start of a partnership between the luxury retailer and the music icon to benefit the Elton John AIDS Foundation’s Rocket Fund. The foundation was established in 1992 to support and provide prevention services, testing and treatment for HIV/AIDS patients. Last night, Saks announced an incredible $1 million donation.

John has also curated a multi-brand collection including men’s and women’s ready-to-wear, accessories, kidswear, beauty and home, from Versace, Valentino, Wales Bonner, Jonathan Adler, Jason Wu, Paco Rabanne and, of course, Gucci – who has dressed John throughout his tour, with proceeds going to the Elton John AIDS Foundation’s Rocket Fund. It’s a dazzling display and reminder that the holiday season is all about giving.